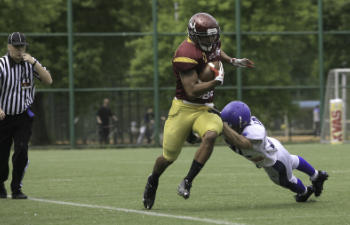 Perhaps, if you are a football fan, you have recently seen Aaron Rodgers throw the football in some of the most exciting games of the season. What you may have noticed is that he is, indeed, quite spectacular. One reason, many have stated, is that he throws the ball with extreme power and accuracy. This, of course, is not surprising. If one were to analyze his throwing motion, one would notice several important mechanical elements. First, and not surprising, the lower body must use the thrust from the legs to rotate the hips, as this is standard throwing technique.

What is surprising with Rodgers, however, is that he is able to generate such an effective motion while on the run, and in both directions. In fact, statistically, he has the highest number of average yards completed from outside the pocket. The second surprise, and less well known, is that if one watches his throwing mechanics, one notices that his feet have left the ground by the time the ball is released. This means, and here’s the real point, that he has created such an effective lower body rotation, especially when he has been moving in the opposite direction, that tremendous torque and power are translated as lag to his arm. The point, from a Sports Hernia doc’s perspective, is that he as such an even graded build up of rotational force from his toes to his fingertips, he probably never puts too much strain on any one body part. Watch him in slow motion…you’ll see.

Posted on behalf of CORE SURGICAL

We are committed to providing quality healthcare to families
located in the New York area and treat patients of all ages.